Iceland is well-known for its extremely beautiful, diverse and photogenic urban and rural landscapes. The stereotype notion of Iceland, by those who have never been is of a land fire and Ice where trolls still run wild; though I have never actually met a troll (although one sees lots of famous errant trolls that stayed out after sunrise and were turned into stone). It is certainly a land of ice and occasionally fire from volcanoes and sometimes a rare grass fire.  Quite apart from awesome volcanoes glaciers (and great floods when a volcano under a glaciers erupts), Iceland is blessed with natural hot springs that heat houses in towns and in the countryside.  The Wind Reader illustrates a much more complex and equally beautiful urban and rural landscape. In fact, in 2007, the United Nations ranked Iceland as the world's most desirable country to live in. The distinction has a lot to do with the way they approach their urban and landscapes. It stems from a delightful mindset that "Whatever you do, do it for the edification of Iceland."

Naturally, this is reflected in Icelandic arts, architecture, and education. But it is also reflected in the much more difficult quest for better land-care. Difficult in the sense that rural depopulation and a contrary natural environment tend to interfere with the best-laid plans of foresters, and soil conservationists. However, those charged with the task of landscape conservation, restoration and improvement have profusely demonstrated they are up for the task and are supported by a large and very active volunteer sector representing many public and civil-minded associations. And of course, given the annual influx of tourists who virtually triples the native population, there is certainly a considerable revenue stream to conserve Iceland's natural  treasures and  beautification town and country.  What better place to demonstrate communities in harmony with Nature than The Agricultural University of Iceland at Hvanneyri as shown in this photo by Áskell þorisson.

Photos of Iceland by Alexander Robertson

Sheep grazing on the slopes of Mt. Hekla

Photo of Mýrdalssandur, taken in 2010, from the same location as the previous slide, demostrates the great work reclamation work by the Iceland Soil Conservation Service.

Waiting for the great Geysir to spout hot water

Grund Church near Akureyri, the largest church in Iceland built by one man - the local farmer

Skógkrætarfélag (Iceland Forestry Association) Meeting at Selfoss. This Association is confederation of over 30 district Associations with 7,300 members representiung a cross-section of society from the very young to the very old.

The Karanuka Gorge, East Iceland
Geraldine Robertson and Jon Loftsson admire the magnificent gorge a year or so before it was dammed up for an equally impressive Hydro Electiic power station.

Húsavík
The beautiful harbour and restuarant at Húsavík, north Iceland

Sandy on an Icelandic Horse while riding through Jon Loftsson's extensive forest planted by Jon and his family
Beautiful Sandur (Sandy) mountain owned by Jon Loftsson, Director of the Iceland Forest Service.

the town of Mossfellsbaer has established many fine and beautiful shelter forests in a way that dosen't detract from beauty of the landscape towards Esja in particular. 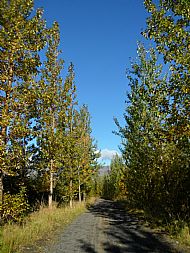 These tall, straight and symetrical trees along a pathway in Mossfellsbær reflect a relativelty low mean annual windspeed

Hraunfoss (lava Falls)is a peculiar 900m long series of rivulets streaming out through middle of a cliff of porous lave from an eruption of a volcanoe under Langjökull.

The attractive and very functional workhouse at Brynfadalur Forest

Fine forests and gardens are cultivated around the hot springs of Hveragerði famous for it greenhouse (some with tropical plants and fruit like banana.

The verdant and partly wooded slopes of Mt. Esja.

The famous church at Skjálholt.

The rare inland (almost)icebergs of Jökulsarlón below the south side of Vatnajökull.

The beautiful farm at Seljaland was covered with ash from the the Eyjafallajökull volcanic eruption. It is the reason for the beautiful and bountifull barley field. Blown dust is visible on the mountains behind The farm.

This remarkable heritage wall shelters a fine garden on Skólavörðustigur. The wall was built by a (female) minister of Hallgrimskirkju.

The rainbow over the village Hvanneyri and the Agricultural Unviersity is a sign of good fortune for and sundry who live and work there. 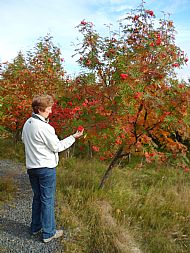 This photo, taken in 1983, show horses on worn out and degraded pasture which has since been restored back to good pasture as in the previous slide.

There are many fine parks for rest stops beside the highways around Iceland. This one in North west Iceland is in a very beautiful setting and sheltered a grove of conifers.

Beautifull sunset on the beautifull hills in Eýstri Ranga, north of the town of Holsvölur, south Iceland.

Geraldine very close to the summit of Mt. Hekla - one of the active volcanoes in world. It is long overdue for a eruption. The drive up and over Mt. Hekla requires nerves of steel and eceptionally strong brakes!

The beautiful architecture of Seltjarnes Church

Many, if not most of the large farms in Iceland the farmers build their own churches and maintain the family graveyards - such as this beautiful example near Blondous.

The giant book ends represent the number of books (all best sellers) by Thorbergur Thordarson, (1888 – 1974) There’s also a fine museum – The Thorberger Centre in Hali, south Iceland is dedicated to the author.

A fine example of what can be achieved in growing comercial forests in Iceland - with carefull seed selection in far off lands (Alaska) and breeding of suitable strains.

Hard to believe that ealy half of the 20th century, this was a black, volcanic desert, and was restored to fine farmland by and used by the Soil Conservation Service.

Low layers of ground fog are quite common they are called Dalaela. The ghost fog because often time the one sees horses but not the body in fog head. The next photo is a better example.

Another expanse of grasslands at Gunnarsholt

This field at Gunnasholt is rented to a horse breeder 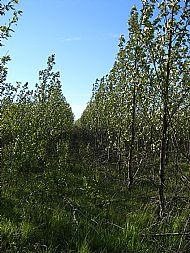 The planation has yielded about 45 indepentent research studies, academic theses besides the practical aspects of demonstrating the forest potentional.

This is what Gunnarsholt appeared in the 1980's. Nowadays it has over 80 kilometers of trimmed willow hedges sheltering rich grassland

Glacial floods associated with glacial melting but volcanic activity can devestated farmland on a huge scale. This is a relative small flood.

A patch of green gold in a darksome worn out valley

Jon Loftsson, Directer of the Iceland Forest Service riding through young forest planation in east Iceland - practice what you preach would be motto!

Horse in beautiful but fragile setting if they grazing is not controlled - for example their hooves create hummocks if kept too long in one corner of the field. 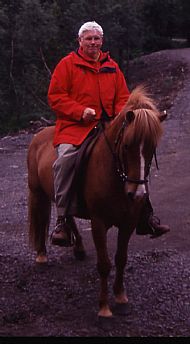 THe Magnificent Harpa with two concert halls and concoures. 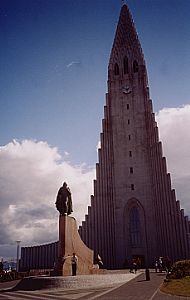 Statue of Lief Ericsson at Hallgrimskirkja in Reykjavik

The famous Landmannalaugar campground with a stream fed by geothermal hot water.

Fishing for Salmon near Holsvölur, South Iceland and close to three active active volcanoes:- Mt. Hekla (long overdue for an eruption, nearby Eyjafjallajökull which erupted in 2010, and the giant volcano Kalta under Mýrdalsjökull glacier that is rumbling and soon to erupt with a devastaing power according to volcanologists. Not to since they give off plenty of warning signs. 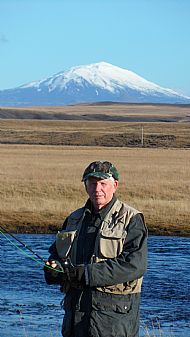 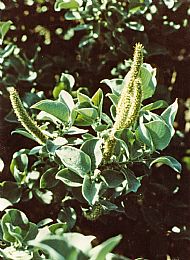 Flanders Moss, Stirlingshire, Scotland
and Ben Lomond In the distavce