Two important books:- Saðmenn sandanna (people of the sands) by Friðrik Olgeirsson and   Heal The Land  by Roger Crofts FRSE see   which  chronicles the evolution of the  soil conservation efforts in Iceland from its early beginnings in the writings of Rev Björn Halldorssón in 1723, when sand storms buried the farms and house, to the creation of the Soil Conservation Service established in 1907 and what it the SCS  has accomplished to the present both as an Icelandic institution and its role as a United Nations International School of Soil Conservation.  Apparently, Halldorssón was the first to attempt to control the sand and stop the drifting. It is from these ealy efforts and others that eventually led to the creation of the Soil Conservation Service in 1907. This article  stone-walls-for-conservation. is an example of  how farmers struggled to save their farms (many could not) by controlling the drifting sand with series of stone walls.

hThere are many examples of some conservation by like-minded people in both the Iceland Forest Service and the Iceland Soil Conservation Service.  The Forest Service in particular has it roots in organzed forestry by Danish Foresters  dating back to 1899. Interestingly, the Iceland Forestry Association (a non-government institution)  was founded by an Act of Parliament in 1930. While the Soil Conservation Service and the Forerst Service are, on paper, separate departments, it is not uncommon for these institutions to switch rolls and cooperate whenever convenient. The on-going expansion of Hekla Forest (Heklaskógar) is a good example.  Likewise, members of local Iceland Forestry Association and Agricultural Associations may hold separate memberships; but they are often basically the same people, particularly the FARMER/FORESTERS among them that are involved in "Healing the Land" - for example Skjolskógur Vestfjorðum is an association of Forest Farmers  in the West Fiords. And they are not just people we'd normally classify as "rural" peoples; because thousands (about 7,300 members) of citizens in the City of  Reykjavik, Akureyri and just about every town and village in Iceland pitch in to Heal the land as it was and even better than it was in the age of settlement 1,000 years ago.

Since the 1970's in particular, the development of  larger, and more efficient land reclamation equipment (including the  use of the Douglas DC4 aircraft for aerial seeding) has accelerated the speed and  revegetation on a large scale. Since the establishement of the Iceland Forest Service, their staff have undertaken the often strenuous business of seed collecting  of tree species in far off lands that would be suitable for Iceland; which,  coupled with tree breeding programs and accelerated production of containerized tree seedlings, speeds up reforestation and wood production. Many of my own photos of a journey around Iceland 1983 and in 2012 illustrates the conversion from a  raw, devastated landscape into expansive, highly productive grasslands and beautiful forests. Below is a Soil Conservation Service's  B&W photo dated 1944 compared to my photo taken about 2010, which abundantly illustrates the soil Conservation Service's ability to transform a  volcanic desert  into  rich grassland on a huge scale.

Also at Gunnarsholt there's a 14-hectare experimental poplar plantation which was originally a joint Canadian-Icelandic study of energy fluxes and other biometeorological variants see The Alaska Poplar is a variety bred at the Iceland Forest Research at Mogilsá and propagated en-mass for the project.  The experimental site was planted in 1990 by students from Akraness High School and was cooperative research project of the Soil Conservation Service, Agricultural Reseach Institute and the Iceland Forest Service and was initiated by Professor Harry Mccaughey of Queen's University, Sveinn Runolfsson of Iceland Soil Conservation, and the Iceland Agricultural Research Institute and is currently being managed by Professor Bjarni D. Sigursson of the Agricultural University of Iceland. So far it is the subject of over 40 scientific papers, 4 Ph. D dissertations and number Masters theses. This link rala@rala.is gives an overview of the Soil Conservation in Iceland 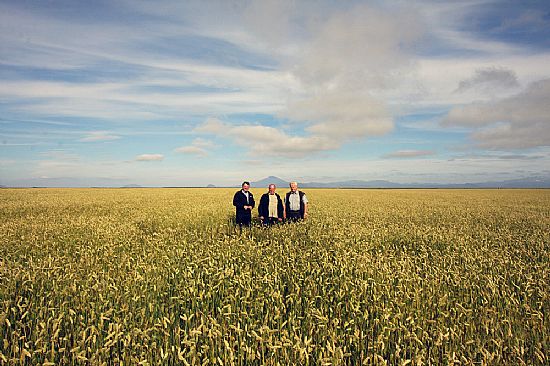 The Soil Conservation Sertvice Headquarters at Gunnarsholt and the International 14 hectar Experimemntal Poplar Plantation. A remarkable example of soil restoration and a centre for international research and education

In 1962, when I first passed through this landscape Mt. Hekla's (last erupted in 1947) it was an enormous black volcanic desert. Nowadays, one passes through vast highly productive grasslands

Gunnarholt has over 80km of trimmed willow hedges and and fields that pruduce barly crop on roatation.

This is an example of severe erosion of delicate souls by wind, water and frost

This is a Rofabarð showing how vey deep icelandic soils can be eroded when the vegatation has been damage.

A patch of fine meadow in an otherwise devastaed landscape

There's scarcely farm in Iceland that doesn't have horses. Unlike the humpety ride on bigger horses, riding over humpety ground on an Icelandic pony is like siiting in an armchair.

This 1983 photo illustrates the problem overgrazing by free ranginging livestock.

Horse breeding is a huge and presumably very profitable busness in Iceland. These horse are grazing on fine grassland that the the Soil Conservation reclaimed from sand desert created by Hekla's eruption

Horses run free but usually don't stray far from thier "home" territory
Free ranging Sheep get blamed for stripping the mountain of vegetation. Of course, they have eaten the tree and shrub seedlings long ago last blade of grass and looks like they are targeting the moss!

Iceland is notable for beautiful sunsets especially on on fine grassy mountains. But a closer look reveals severe soil erosion on the mountain top.

Slowly, but surely, the soil conservation Service is converting this volanic desert below Mt. Hekla into productive grassland.

Violent winds have literally sorted large stones into diagol cross-slope rills. This close to Mt. Hekla. Its a tough assignment to vegetate this bank - but I,ve seen Icelanders tackle worse!

Icelandair Pilots have volunteered to do the aerial grass seeding and fertilization using the Douglas DC4 airplane. This is an estrordinary example of there skill in precision flying.

This another that was completey destroyed blowing sand. Now it is has been restored to one most productive farming disricts in Iceland. And a very welcome stop for great flocks of Swans and Geese on their migration to-n-fro Iceland.

Migrating geese and swans feeding on the campus of The Agricultural University of Iceland, Hvanneyri

Much of the soil conservation work such as seeding of grass and fertiling is done by porpose built aircraft.

Part of an elaborate stone system used to combat serious bloing sand that destroyed many farms in south Iceland. This one built in the late 18th century is Keldur

This the farm that was made famous in worldwide media when it was smother by huge, black clouds of ash from the Eyjafallajökull eruption in 2010. The dust is still blowing across the hills. But the barley benefited from the nutriens in ash.

Some of the large group of High School students from Akraness that planted the Gunnarsholt plantation in 1990 with perfect spacing and close to 100% survival rate by 1997.

The Gunnarsholt planation at about 5 years old turned out to be a great success in demostrating fast-growing forest on barren lands.

Professor Bjarni Dirik Sigursson is currently resposible for the Gunnarsholt experimental Plantation. As a professor of Forestry and Environmental Science at the Agricultural University of Iceland and with similar appointments and collaboative research in Sweden, he maintains close connections with Swedish scientists studying energy flux in forests. In fact, Gunnarsholt was part of the NORDIC FLUX NETWORK (now the EUROFLUX network). 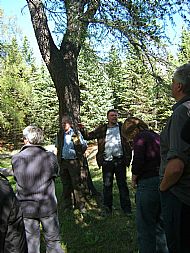 Bjarni is typical of the Icelands soil conservation scientists and teachers insofar they teach an holistic approach to healing and managing the land and functioning across several disciplnes. while maintaining a very active international participation.

The Gunnarsholt planation and some of 80+ kilometers of trimmed shelter hedges at Gunnarsholt. Apart from regular projects, Gunnarsholt also has a United Nations University School of Soil Conservation.
Back to Top
Part of spanglefish.com - Web Sites. For Anyone. For Free. Sign up now!
site map | cookie policy | privacy policy | accessibility statement