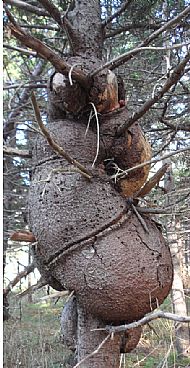 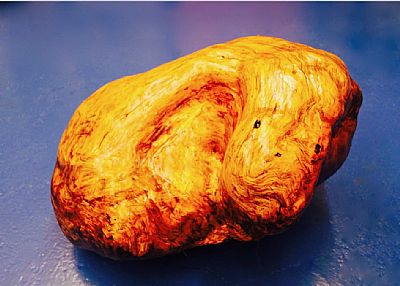 Across Newfoundland, especially in coastal areas that have a harsh winter that damages trees that can be quite spectacular such trees sometimes develop burls like two on Balsam Fir trees at Topsail Beach Newfoundland. To a carver, the burls, when removed from the trunk, are often featureless. However, the colour photo are of a burl  that is naturally zoomorphic. It was found growing on the trunk of a yellow Brirch tree in Newfoundland - hence the bright yellow wood!. Because of it's shape and natural pair of blaclk eyes; the carving  is named  Nessie - the baby monster. It was provided by William (Bill) Clark, a Forest Manager in Newfoundland. Carving involved delicately removing a black inner part adjoining the section of the trunk layer tand carefully revealing  it's  zoomorphic animal-like baby monster  features. 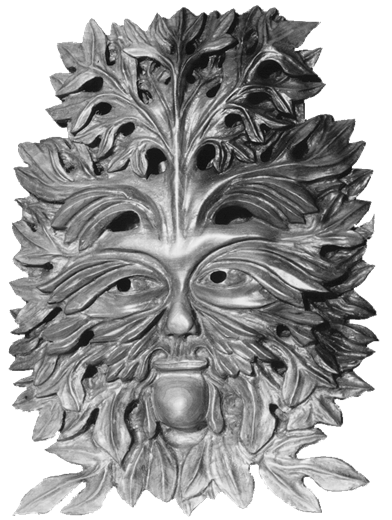 Boreal winters can be a long drawn-out affair if one doesn't keep active physically and mentally. Woodcarving is an excellent way to fill in the time between blizzards and  the inevitable snow shovelling. As to subject matter, the good Scots advice is "Stick tae whit ye ken, an ye'll nae go wrang." In my case, it is Highland culture and landscapes

See also a slide show  on some of my carvings

The carving of Rob Roy (Robert McGregor alias Robert Campbell of Inversnaid) with friends and detractors set in my native Glen Arklet, is my contribution to the bi-centennial of the publication of Sir Walter Scott's famous novel Rob Roy in 1817. For notes on the characters see Notes on Wood Carvings in the Library 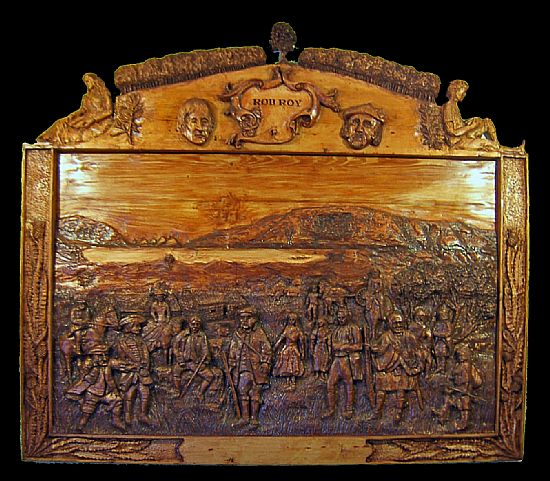 King Malcolm II MacDonnachaid (better known as Canmore) is descended from Duncan (one of three the sons of St. Columbus, and in a later age, descended from Gróa of Hvammur, West Iceland. He was King of Scots, King of Strathclyde, and Prince of Cumbria.  Defeated and and Killed MacBeth "I will not be afraid of death nor bane; till Birnam woods come to Dunsinane"Shakespear, MacBeth Act V, Scene III. Today,  Clan MacDonnachiad (children of  Duncan) is one of Scotland's most ancient and one of the largest clan Robertson, Duncan, McConkey.  According to DNA I share the Y-DNA of  Naill of the nine Hostages group and fit in the D

This is the Crest of the distinguished Icelandic Forester Sigurður Blöndal of Hallórmsstaður, Iceland. 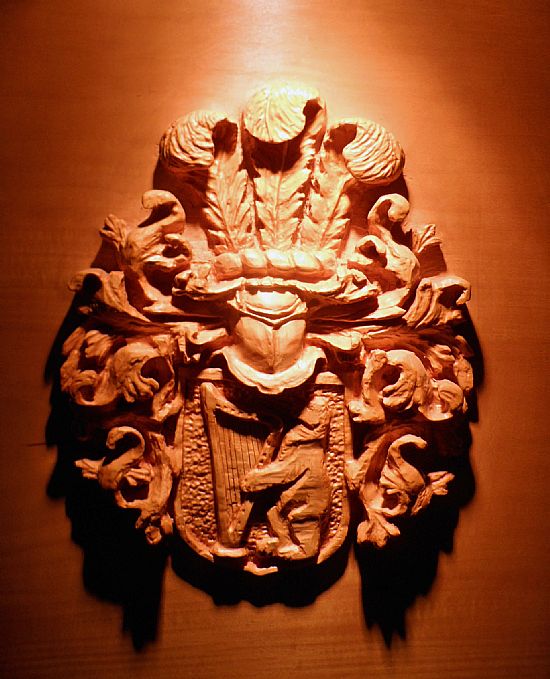 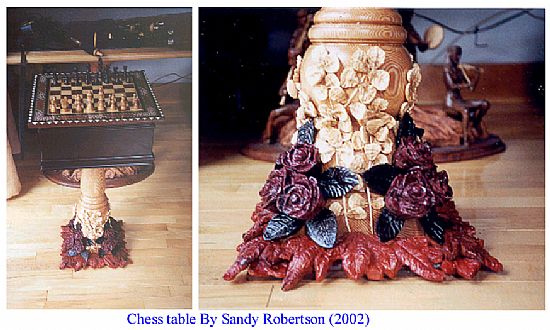 This is a self-portrait of sorts when I was a young forestry worker draining the wet hills of the Queen Elizabeth Forest Park in preparation for planting trees. The park was created on the coronation of Her Majesty, Queen Elizabeth !! (Ist of Scotland) and it was our job to make sure the forest was well-stocked with matured and is now being logged on a rotational basis. 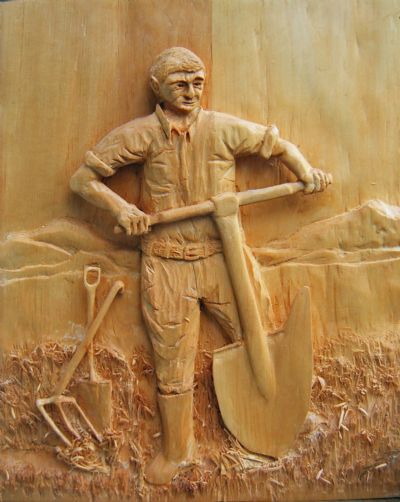 This is carving is of the well known and long-departed Trossachs shepherd Jimmy MacKerracher. Jimmy moolighted as barber using only sheers (and no comb). If you dare requested a certain cut his response was always "Och! Hud ye're tongue, laddie; ah can only dae a short, back-n-sides wi bits o' ye'r lugs left on." 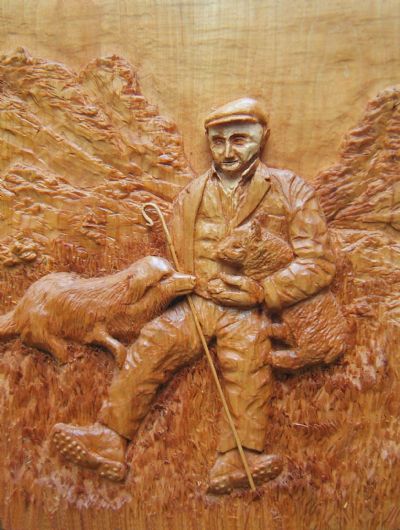 Rob Roy and his comporaries 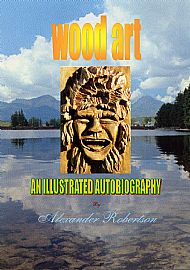 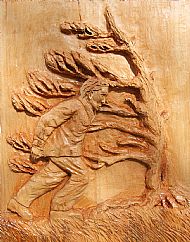 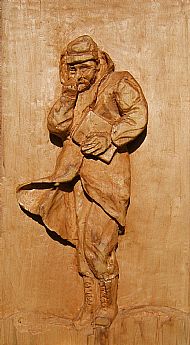 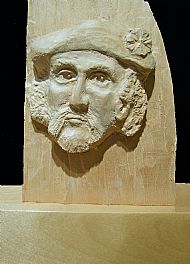 The famous Rob Roy MacGregor alias Robert Campbell of Glengyle and Inversnaid. He owned most of the east side of Loch Lomond "The Eagle was lord above, and Rob was lord below"

Carved this model of the complicated terain of Mout Esja for simulaing wind on the mountain.

For every chapter in thw windreader and Lesið í Vinndin I made a carving which fits the context. 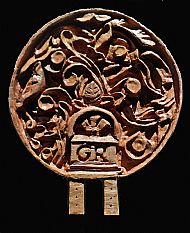 A Moroccan teapot on the trevet, with a Lady of the Lake carving as a backdrop 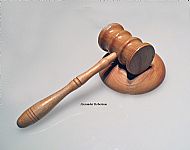 Sometimes a gavel is handy for keeping the peace at boiterous meetings on the subject of landscape restoration. 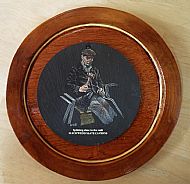 Welsh Roofing Slate cutter mounted in a carved roundel with outer edge of white birch and inner paduck wood and inlaid pine strip. The slate is from Wales. 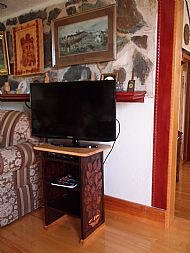 A new TV stand with hand-carved side panels 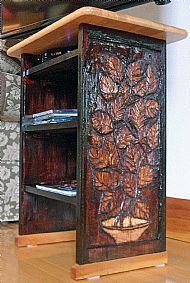