In May and June Geraldine and visited Bournemouth for several weeks strolling along its magnificent beaches and exploring many of its fine gardens - particularly the exquisite  Compton Acres Garden in Poole - see  documents/gardens/compton-acres-forest-garden.pdf  and hopping on the local busses for walkabouts in beautiful little towns and fine forests. After a few weeks there spent another couple of weeks in quite resort of Pedras De el-Rei East of Faro close to Santa Lutzia on the south coast. Will post link this beautiful place later.

In October I returned to Iceland to teach the "Landscape & Shelter" course to a fine class of enthusiastic students at the beautiful Agricultural University at Hvanneyri. Before and after I spent reviewing sites for afforestation with Einar Gunnarsson, a forester with the Icelandic Forestry Association (IFA); notably the use of forest to tame the fierce katabatic winds on mount Esja which affects Reykjavik. Also reviewing the prospects of afforesting a large tract of devastated lands on the south side of Lake Þinvellir recently bought by the IFA. Also, checking out the annual Christmas Tree supply at the IFA's Brynjadalur. Managed to fit a wee bit of Salmon Fishing on Eystri Rangar near Holtsvölur thanks to Einar and his wife Dora. While in the district I also visited my good friend Sveinn Runolfsson, Director of the Soil Conservation Service and his wife Oddný. Also spent time with August Halfdansson's remarkable forest which he planted by himself. August practices both engineering as owner of a glass factory and also a part-time manager of Mosfellsbær's Forestry Association. Also visited Adalsteinn, Director of Forest Research  remarkable work on transforming a desert into a forest in his spare time.  Many thanks to Einar, Brynjolfur and Ragnhildur of the IFA, Sveinn and Oddny (Gunnarsholt) and Bjarni and friends (Agric. University), Adalsteinn and August for their most generous hospitality once again.

Notes for the Iceland Forestry Association Tour of the Highlands of Scotland can be found in the Library in Iceland Folder. These inclide 16 chapter covering  major historical events of and also forest history

September 25-October 3, 2011 Sandy Robertson had the great privilege of hosting and guiding 75 members of the Iceland forestry Association on a grand tour of his native Scottish Highlands. Ragnhildur Fréysteinnsdóttir’s summary of the tour is available under the Iceland heading in the LIBRARY on this site, and also in Icelandic on the Iceland Forestry Association website www.skog.is.  Sandy also wrote a 227pp guidebook with a broad overview of the local history and culture, forests, and many points of interest of the districts we visited (see image below). Notably, The Great Trossachs Forest, Forests of Atholl, the Great Glen Forest around Loch Ness, the famous woodland garden at Ardkinglas Estate (with the tallest tree in Britain - a 135 year-old Grand Fir at 64.4), Inverary Castle’s designed 19th century forest landscape, Blair Castle huge trees, famous garden and deer park with ancient oak. We also visited one of the worlds oldest trees - a yew at Fortingall. Dunkeld Cathedral was a holy grail, not so much as religious place – hallowed as it is – but the location of a famous European Larch the “Mother of Millions” which in no small measure revolutionized forestry. Naturally, there was a sentimental visit to Skye, from where a large portion of Icelanders are descended and still reflected in the fact that many of Skye’s place names are derivatives of Old Norse. Time was spent in beautiful towns and villages such as Inverness, Pitlochry, Stirling Castle and the greatly renovated Glasgow - reclaiming its mid-19th-century reputation as the most beautiful cities of Europe with its blend of old and stunning new architecture befitting its status as the European Capital of Culture in 1990.

For their assistance and hospitality, many thanks to Hugh Clayden, Liz Shortall, David Robertson and Dave Wilkie of the Forestry Commission (Scotland), and also the staff of the Kingsmill Hotel in Inverness, the Drymen Arms Hotel in Drymen, and the Novatel in Glasgow. also the congenial bus drivers . And of course,  Fergus Wood and Tommy Walker and piper and Highland Dancer for a truly memorable ceilidh at the Buchanan Arms. Naturally, a tour on this scale is a major undertaking with many hands involved most importantly Einar Gunnarsson, Aðalsteinn Sigurgiersson, Ragnhildur Fréysteinnsdódittir of the Iceland Forestry Association and Kristjan Baldersson of Trex Travel and all the participants - a wonderfull group to travel with. Robertson's Notes for the tour of the Highlands are in the Iceland Folder in the library. 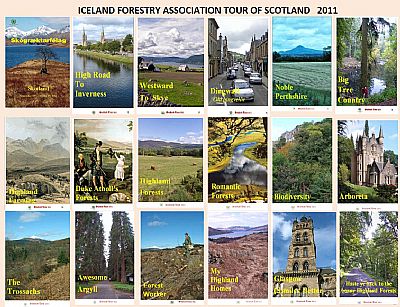 Gardens for a snowy and windy climate

Two new files to the library; they are Gardens for a windy and snow climate 1.pdf which is an overview of my own garden,   and Gardens for a Windy and Snowy Climate 2.pdf which illustrate a couple of my 'volunteer' gardens:- one at Government House, the other for an industrial site in St. John's which illustrates the use of snow berms to shelter a young garden.

Conference in Honor of Alexander Robertson

On Saturday September 18 a conference was held in honour of forester and „friend of Iceland“ Alexander „Sandy“ Robertson, under the heading of  “Wind in the landscape  –  Forests and shelter on the slope of Mt. Esja“.  The conference was organized by the Icelandic Forestry Association, Reykjavík Forestry Association, Kjalarnes Forestry Association, Iceland Forestry Research at Mógilsá, Agricultural University of Iceland and the Faculty of Physical Sciences at the University of Iceland. Símon Þorleifsson chaired the conference, with presentations from Einar Gunnarsson, forester at the Icelandic Forestry Association, on the forests on Mt. Esja, Haraldur Ólafsson, Professor of Meteorology at the University of Iceland, on the winds on Mt. Esja, Þorbergur Hjalti Jónsson, Forester at the Icelandic Forestry Research, on storms and stable trees, and from Alexander Robertson himself, on reading winds and forests. Aðalsteinn Sigurgeirsson a Forest Geneticist director of research, for the Icelandic Forestry Service, handled a roundup of the day’s topics and led the discussions. In addition to his presentation Sandy gave a demonstration on the effect of winds, by using models and dry ice to mimic the effect of different landscapes on winds.  This approach proved both entertaining and interesting. Of particular interest was the effect on a model of Mt. Esja, carved from wood by Sandy. Following the model demonstration, Bjarni Diðrik Sigurðsson thanked Sandy on behalf of the organisations holding the conference and Aðalsteinn Sigurgeirsson presented Sandy with the gold badge of the Reykjavík Forestry Association. The conference then concluded with a tour of the slopes of Mt. Esja"

MANY THANKS FOR THIS GREAT HONOR MY DEAR ICELANDIC FRIENDS AND COLLEAGUES. Its a great privilege to work with you.

The Iceland Forestry Association (Skógræktarfélags) celebrated its 80th Anniversary in and around Selfoss, with a few days of meetings, a forest tour followed  a grand outdoor feast in in one of its forests. On the last day they made a very special celebration at Thinvellir - that hallowed place where modern democracy as we know it was first formed.  There was listen to inspiring speeches from distinguished Icelanders who did much forest the association and the development of forestry - including some who were at the inaugural meeting in 1930. We also heard a marvellous male-voice choir - whose renditions was enhanced  by the echo of the great fault-line canyon.  I had the great honoured of piping the members up the gathering place. For pipers viewing this page, I played McPhail of Bunnessan, Mrs. Hamilton of Pitcaithlands and Mrs. MacPherson of Inveran Lindesfarne and the Association's anthem. Many thanks  to Ragnhildur Fréysteinnsdóttir for the photograph. 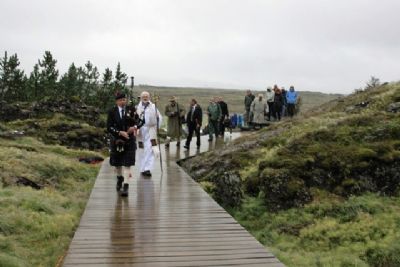 Lesið í vindinn - Landgræsðla
The Iceland  Soil Conservation Service  (SCS) commissioned Ingvi Þorsteinsson, a distinguished Icelandic biologist, to translate the  Wind Reader series into Icelandic. Of course, such a large task required a great deal of assistance and guidance  from Sveinn Runólfsson, Director of the SCS and his staff.

Lady of the Lake Wood Carving

My Lady of the Lake wood carving was returned home following very successful exhibitions, while ion loan  to the Forestry Commission, Cowal & Trossachs District as a contribution to the SCOTTSLAND  celebrations of the bicentennial of the publication of Scott's Lady of the Lake in 1810. In June 2010 the carving was on display in the Loch Lomond and Trossachs National Park headquarters at Carrochan. From July-October it will be displayed in the Trossachs and is currently part of an exhibition in the Aberfoyle Discovery Centre It last stop was the University of Stirling on the occasion of Forth Natutiurailst & Historian Symposium on the theme "Forest, Trees and People". Many thank's to Liz Shortall for arranging the loan and  organizing the exhibitions.  http://www.strathard.org.uk/scottsland.html

In August 2010, I returned to Iceland to teach my course on Wind and Landscape at the Agricultural University of Iceland,, give a presentation at a mini-conference on the Winds of Esja in relation to forestry and, of course, in the company of friends and colleagues in forestry and soil conservation,  travel  beautiful Iceland  to study the nature of wind on the landscape notably effects of ash fall out from the famous Eyjafallajokull eruption. No doubt I will have an illustrated article on my travels in Iceland for you during the winter.

The spring weather in Newfoundland has been somewhat wetter and cooler than usual; which of course did the gardens wonders. Our own garden is more spectacular than usual as is my other one-year-old garden on my Brother-in-Law's industrial property, as a result the perfect Spring weather - for plants that is!.

Thanks to all of you who accessed my website. If you have any questions or suggestions please email me at